Yesterday I had an amazing opportunity to record a couple of scenes of my radio script, Out of the Frying Pan. This was arranged by my creative writing tutor at uni, Jane Purcell and her friend Chris Wallis, an experienced radio director and producer. The student union runs a couple of radio stations and it was in their studios that we got to record the scenes.

I was excited anyway as this was my first time in a studio but Chris’ experience made all the difference. He introduced himself with stories about the industry and the people he’d worked with; apparently name dropping is quite intimidating! In the studio though, I felt like I was getting a real taste of what it would be like to be doing this for a living. We spent maybe and hour and a half on my piece, recording around 3 minutes worth with two, very talented, young actors. At some point I hope I’ll get the files so I can post them, I’m quite eager to hear the final thing myself!

What I found the most interesting part of the day however, was seeing how my writing can be a fluid thing. I’ve always had the idea that once I’ve finished with something, it becomes a static object; it’s done. This just isn’t the case. The beauty of language is that every person will interpret any collection of words in their own way. They will say them differently, think about them differently, attach different meanings to them; and seeing that happen before my eyes was amazing. 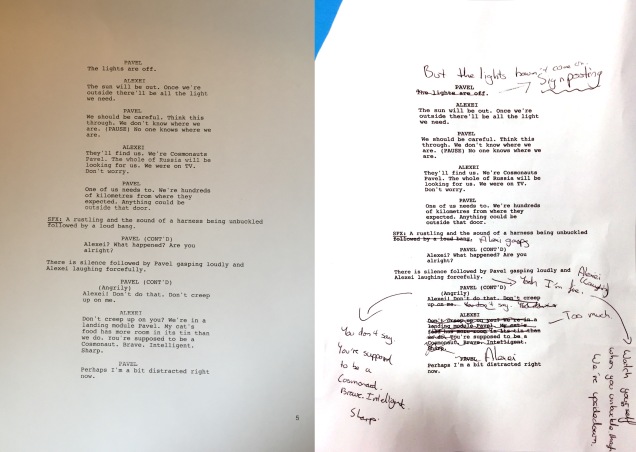 To start, we read through the scenes of my script that we would be recording, (1,2 and 4), and immediately, hearing it out loud in that setting, I realised I needed to make changes. Some of this was just about meshing scenes 2 and 4 together without 3 in between, but a lot of it was hearing other people say my words and concluding the dialogue wasn’t as natural as it could be. Chris of course had suggestions, but he took mine on board too and, in tern, I listened to what the actors thought. This collaborative process in motion was not something I had been expecting but was certainly useful. Even after two read-throughs and a couple of minutes of furiously scribbled edits on my copy of the script, we had something that sounded much better.

It didn’t finish there.

I’m not sure how many takes we did, double figures probably, but I made additional notes and changes on my script throughout. The first few of these were technical and largely about trying to recreate the confined conditions of a landing module stuck in dense Siberian forest as best as possible in a recording studio on the first floor of the SU building, just off the A1 in central Hertfordshire. We sat the actors down, moved them together to share one mic and even chucked the screen portion of a green screen over them both.

Other changes though, came from the performances. As we recorded and as the actors got into the roles, certain lines felt like they needed to be altered and in certain moments, the tone didn’t feel quite right, so that got changed too. (A before and after picture of my edits on one of the pages of my script is the header image of this post.) Making these changes, doing edits on the fly and then expressing my thoughts to Chris and the actors, became a brilliant lesson. It was in explaining how I saw Pavel as a worn down and resigned father and Alexei as an over excited child, frustrated by his father’s restrictions, that I realised I needed to think like this no matter what I’m writing.

When I was creating the characters, at least after a couple of drafts, I had imagined this parent-child relationship, but I’d never had to express it before. Once I did, I instantly felt I knew my characters better and how they would walk, talk and think. In future, I’m going to do this for any character I write. I might not have actors to talk to on those occasions, (so, loving and very patient girlfriend, expect lots of boring lectures on the convoluted motivations of maniacal, evil professors or whoever I’m writing about), but I can at least think how I would express it in the imagined situation that the character was to be performed.

More than this though, more than the lessons I’ve learnt or conclusions I’ve drawn, I massively enjoyed hearing words I’d written being lifted off the page and given a life of their own. I very much hope this isn’t the last time this happens, if I didn’t have motivation to pursue my writing before, I certainly do now, but even if it is, the experience was fantastic.

Hopefully, the final thing might even sound good too.